Home » Sexual Harassment in the Workplace

Sexual Harassment in the Workplace 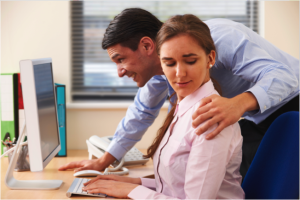 Harassment is unwelcome conduct that creates a work environment that is intimidating, hostile, or offensive to reasonable people. There are various types of illegal workplace harassment.[1] When the harassment is of a sexual nature or about the person’s sex, it becomes sexual harassment, a form of discrimination protected by law.

It is unlawful to harass a job applicant or employee because of that person’s sex. Sexual harassment may consist of a “quid pro quo” request, such as demands for sexual favors in exchange for a promotion, or “hostile environment” harassment, characterized for unwelcome sexual advances and other verbal or physical harassment of a sexual nature, such as making derogatory remarks about the person’s sex in general. It may even extend to the use of offensive objects or pictures. The behavior can even occur through a cellphone, termed “sexting.”

For example, in 2006, Pepsi-Cola General Bottlers, Inc. settled a sexual harassment lawsuit for $400,000 with one of its former female employees in their Illinois plant. According to the EEOC, for the three years she was employed, numerous male employees subjected to ongoing sexual harassment. The males repeatedly made vulgar sexual comments, asked her for dates and sex, and touched her. They also wrote sexually explicit graffiti about her in the men’s restroom. The victim complained repeatedly to her supervisors. She was eventually terminated in retaliation for making the complaints.

In addition, in 2013, a federal jury awarded over $20 million in damages (including punitive damages) in a sexual harassment claim filed by eight former employees of Four Amigos and Top Dog, Inc. (a Largo, Florida travel company) for claims that male managers groped and sexually harassed female workers, requesting sexual favors and even holding workplace meetings to discuss matters of a sexual nature. Seven of the former employees were women victims of the harassment, and one was a man who was terminated in retaliation for reporting the harassment.

Sexual harassment is a form of sex discrimination that violates Title VII of the Civil Rights Act of 1964 (Title VII). Employers are also prohibited from retaliating against an individual who asserts his or her legal rights.[2] The Equal Employment Opportunity Commission (EEOC) is the federal agency overseeing this type of discrimination under Title VII.

Isolated incidents do not rise to the level of illegality unless they are extremely severe. Sexual harassment conduct must be unwelcome, and it becomes unlawful when the conduct explicitly or implicitly affects an individual’s employment, unreasonably interferes with an individual’s work performance, or creates an intimidating, hostile, or offensive work environment.

Victim and harasser can be of the same sex

The victim and the harasser can be either a woman or a man, and the victim and harasser do not need to be of the opposite sex. For example, in 2001, the U.S. Court of Appeals for the Ninth Circuit held that harassment based on the perception that an employee is effeminate (he did not conform to stereotypes for his biological sex) is a form of discrimination based on gender bias. In this case, the plaintiff was a restaurant server who was subjected to sustained bullying, including insults, name-calling, and obscenities.

The harasser can be the victim’s supervisor, a supervisor in another area, an agent of the employer, a co-worker, a non-employee, and even a customer. In addition, the victim does not have to be the person harassed and can be anyone affected by the offensive conduct of the harasser, such as a witness of the behavior.

As with other types of discrimination, the employer is barred by law from harassing individuals in retaliation for filing a discrimination charge, testifying, or cooperating in an investigation, proceeding, or lawsuit under these laws; or for opposing employment practices that they reasonably believe violate anti-discrimination laws.1

Recovery under federal law may include attorney’s fees, back pay, reinstatement or front pay, compensatory (e.g., emotional distress) and punitive damages. Liquidated damages, interest, and costs may also be available, depending on the claim. In the case of employer retaliation, injunctive relief is also available. In addition, Florida state law allows the recovery of punitive damages, injunctive and/or affirmative relief (e.g., to stop the employer’s actions and/or make the injured employee whole).

An award for damages for sexual harassment depends on the type of claim, the individual facts of the case, and how it is pursued. For additional information, see the Damages in Discrimination Claims blog article.

Whether you are an employer or employee, the Orlando employment law attorneys of Burruezo & Burruezo can assist you in assessing a sexual harassment discrimination situation and offer legal representation, if necessary. Click here to contact an attorney now.

[1] See the Harassment in the Workplace blog article for more information.