The Fair Labor Standards Act (FLSA) is a federal law that sets minimum wage, overtime, recordkeeping, and youth employment (child labor) standards. It requires employers to comply with specific requirements for non-exempt covered employees.[1] The FLSA is enforced by the U.S. Department of Labor (DOL).

FLSA applies to employees working for covered “enterprises” and also covers “individual” employees whose work involves them in “interstate commerce,” as defined under the law.

Under Section 203 of the FLSA, enterprise coverage applies to an enterprise “engaged in commerce or in the production of goods for commerce.” Specifically:
“(A)
(i) has employees engaged in commerce or in the production of goods for commerce, or that has employees handling, selling, or otherwise working on goods or materials that have been moved in or produced for commerce by any person; and
(ii) is an enterprise whose annual gross volume of sales made or business done is not less than $500,000 (exclusive of excise taxes at the retail level that are separately stated);
(B) is engaged in the operation of a hospital, an institution primarily engaged in the care of the sick, the aged, or the mentally ill or defective who reside on the premises of such institution, a school for mentally or physically handicapped or gifted children, a preschool, elementary or secondary school, or an institution of higher education (regardless of whether or not such hospital, institution, or school is public or private or operated for profit or not for profit); or
(C) is an activity of a public agency.”

Individual coverage applies to employees whose work regularly involves them in commerce between states or “interstate commerce.” Specifically:

In addition, it is important to note that once an employer is covered, all of its employees are covered by the FLSA, not just the employees who are themselves engaged in commerce or the production of goods for commerce. 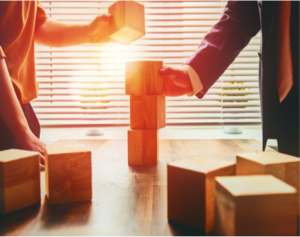 Specifically, the FLSA defines “goods” as “goods (including ships and marine equipment), wares, products, commodities, merchandise, or articles or subjects of commerce of any character, or any part or ingredient thereof, but does not include goods after their delivery into the actual physical possession of the ultimate consumer thereof other than a producer, manufacturer, or processor thereof.”

However, according to an 11th Circuit decision in 2010 (Polycarpe v. E&S Landscaping Service, Inc.), the “ultimate consumer” defense does not apply to materials, only goods, and the handling of materials by employees will trigger enterprise coverage, entitling the employees to FLSA benefits. The court defined materials as “tools or other articles necessary for doing or making something.” It also resolved that the material “must have a significant connection with the employer’s commercial activity, ” such that the landscaping company’s employee use of mowers, edgers, trucks, pencils, and gasoline produced out-of-state triggered enterprise coverage.

Employers can benefit from the assistance of knowledgeable legal counsel when determining whether they must comply with FLSA under the “enterprise” or “individual” coverage. When faced with a legal challenge, they must also properly plead a defense, or else, they will risk liability for non-compliance. Employees who believe that they are entitled to FLSA minimum wage and overtime benefits should seek legal counsel to help them determine their options, as the size of their employer is not the sole factor determining whether they are covered and entitled to FLSA benefits.

Whether you are an employer, employee, or independent contractor, the Orlando employment law attorneys of Burruezo & Burruezo can assist you in assessing an FLSA employer and employee coverage situation and offer competent legal representation, if necessary. Click here to contact an attorney now.

[1] See blog articles Independent Contractor or Employee? (Part 1): Introduction and the FLSA Perspective, and Exempt or Non-Exempt? Employee Classification Under FLSA for more information.
[2] This amount is adjusted each year by the Social Security Administration.