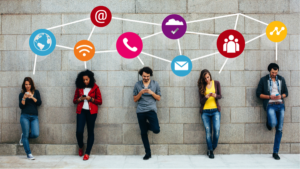 Social media and other online venues have become frequent forums for communication. Often, employees post comments on Facebook or Twitter, among other social media, discussing frustration with work situations, criticizing customers, co-workers, employment conditions, or their employer. Sometimes this behavior may damage an employer’s reputation in the marketplace and employers may act upon it by either reprimanding employees or discharging them. However, under certain circumstances, the law may protect these work-related concerted employee exchanges.

The National Labor Relations Act (NLRA) protects the rights of employees to act together to address work conditions. This right is not limited to employees who are members of a union.

“Concerted Activity” occurs when two or more employees act for their mutual aid or protection regarding terms and conditions of employment. A single employee may also engage in protected concerted activity when acting on the authority of other employees, such as when they present group complaints to the employer’s attention, try to induce or seek to prepare for group action.

The NLRA’s protection extends to work-related communications through social media, such as Facebook and Twitter. Thus, under the NLRA, an employer may be banned from limiting what employees post on social media sites and their personal accounts when the posts amount to protected activity under the Act. Also, the discharge of employees for participating in work-related social media discussions may be unlawful, even if the discussions are adverse to their employer.

For example, in 2014 the employees of Triple Play Sports Bar & Grille in Watertown, Connecticut complained on Facebook that they owed taxes because of their employer’s improper handling of the tax withholding on employee paychecks. The employees had previously complained about the errors, and management agreed to set up a meeting to review and address their concerns. Prior to the meeting, a former Triple Play employee posted a comment on Facebook regarding the company’s inability to do their tax paperwork correctly. A Triple Play employee who worked as a bartender commented on the post, stating that she also owed taxes due to the company’s errors and added an insult to one of Triple Play’s owners. In addition, a third employee who worked as a cook “liked” the former employee’s original comment. The employer then fired both the bartender and the cook as a result of their Facebook comments, and they filed a complaint against Triple Play with the National Labor Relations Board (NLRB), the independent federal agency that enforces the NLRA.

After examining the complaint, the NLRB found that Triple Play had violated the NLRA and that the company’s social media policy was impermissibly vague. The company’s policy stated the following, in part:

“[W]hen Internet blogging, chat room discussions, email, text messages, or other forms of communication extend to employees . . . engaging in inappropriate discussions about the company, management, and/or co-workers, the employee may be violating the law and is subject to disciplinary action, up to and including termination of employment.”

Most employees in the private sector are covered by the NLRA. The following workers are excluded from protection:

In addition to injunctive relief to curtail illegal employer practices, the willful violation any of the NLRA may trigger a misdemeanor conviction and fines up to $10,000, or imprisonment for up to one year, or both.

Employers covered by the NLRA should seek the advice of counsel prior to developing social media policies, and especially before acting based on the comments made by employees on social media, as this conduct may be protected even when it contains disparaging comments. Employer’s policies must be specific about what information employees may not reveal. They may include examples of inappropriate postings, prohibitions on bullying, discrimination, and retaliation.

Under certain conditions, workers have the right to criticize their employer in public forums. For example, legitimate discussions of wages or working conditions are protected, and although mere “gripes” are generally not, they will likely be protected if true, and if they are made as part of work-related group activity among employees.

Employees who believe they have been reprimanded or discharged based on their social media or online comments should contact knowledgeable legal counsel to evaluate the situation and assess their potential claims.

Whether you are an employer, employee, or independent contractor, the Orlando employment law attorneys of Burruezo & Burruezo can assist you in assessing a social media concerted employee action situation and offer competent legal representation, if necessary. Click here to contact an attorney now